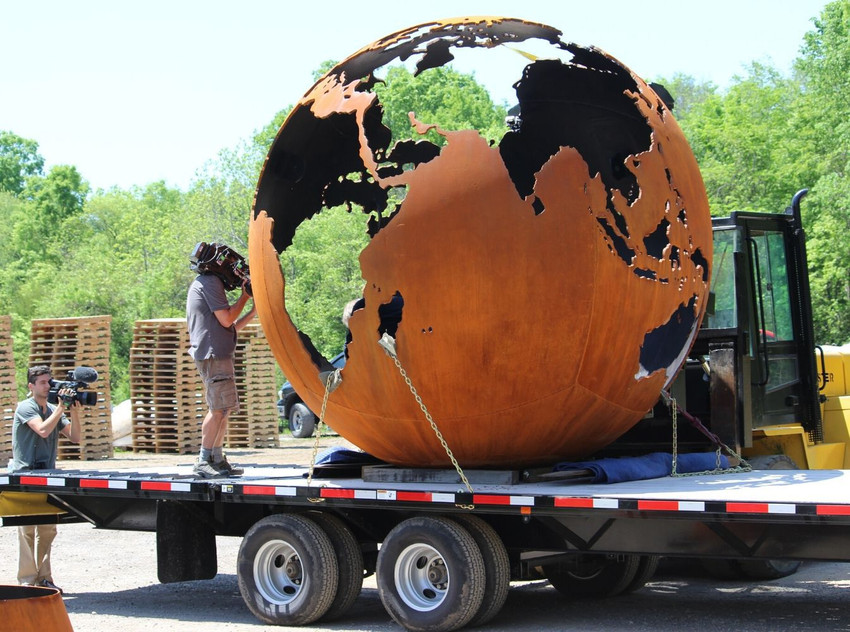 Third Rock: The Fire Pit That Started It All

Fire Pit Art® has been around for over a decade. But how did it all begin? Unbeknownst to creator Rick Wittrig, he started his journey toward Fire Pit Art® as a young man. It all began while he was growing up on a small Mennonite farming village in the Illinois prairie. Rick learned from the farmers there who built and repaired their farming equipment. He saw first hand how to use the equipment they used like arc welders and brazing rods. What Rick learned from these farmers and machinists developed into skilled craftsmanship. The core skills he developed at that time remain the foundation of where he is today!

From his past, he grew his future love and respect for the art of metal craftsmanship. Wittrig has said, “Where others might see a pile of rusty metal, I see art in the making.” With this mindset, Rick began working on one of his first fire pit designs- Third Rock. Rick was unable to get the image of our world constructed out of steel out of his mind. He handcrafted our planet, Earth, with quarter-inch thick carbon steel. He then coated its interior with high-temperature resistant paint. Then, Rick finished it with an iron oxide patina. His first masterpiece, Third Rock, was complete!

This steel orb portrays the Earth’s features in great detail. Revealing the Earth’s fiery inner core when lit and depicting the Earth’s watery two thirds in carbon steel. Observing his new creation ablaze, Rick named his creation Third Rock. As we on Earth are the third planet from the sun.

He crafted this design out of pure enjoyment for himself and his love for metal craftmanship. On a whim, with no leads and without any understanding of who would have an interest, Rick decided to step out. He made his masterpiece available to others. That is when Fire Pit Art® was born, with Third Rock becoming a signature piece that has shipped around the world!

Years later, Rick was to create a firepit that would "set the world on fire". This special fire pit would be for the Vancouver Olympics in the Winter of 2010. The Olympics are a sporting event like no other. The event brings people together from all over the world. Fans cheer for people from far and wide as they stretch their athletic abilities to the max. This uniting force is what drove Wittrig to recreate his signature masterpiece. It became a symbol of world-wide unity and sportsmanship. It was a humbling moment for Fire Pit Art®, as they watched the symbolic lighting of the torch. Which in turn ignited the world through their unique and handcrafted design!

You may be familiar with ESPN, Burning Man, Marriot, and Lamborghini. Do you know what they all have in common? They have all featured fire pits crafted by Fire Pit Art®! These big names shine a bright light on their humble family-owned business. But, the Wittrig's find the most joy in working with their individual customers.

One thing all their customers share in common, whether they be corporate or an individual, is the love of art. Many customers return for fire pit pieces for their loved ones, wanting to spread the joy of their fire pit. Many customers also return for a second fire pit that they use for a seasonal home. Fire Pit Art® pieces are not only artistic, but durable, and last as heirlooms in families.

Fire Pit Art® designs have the ability to outlast harsh weather conditions. Rain drains and coverings protect your design so you can have peace of mind over your new investment. Third Rock may have started it all, but Rick and Donna Wittrig continue to strive upward and onward. To date, they offer dozens of cataloged designs. Fire Pit Art® even designs custom pieces for customers across the nation and abroad.